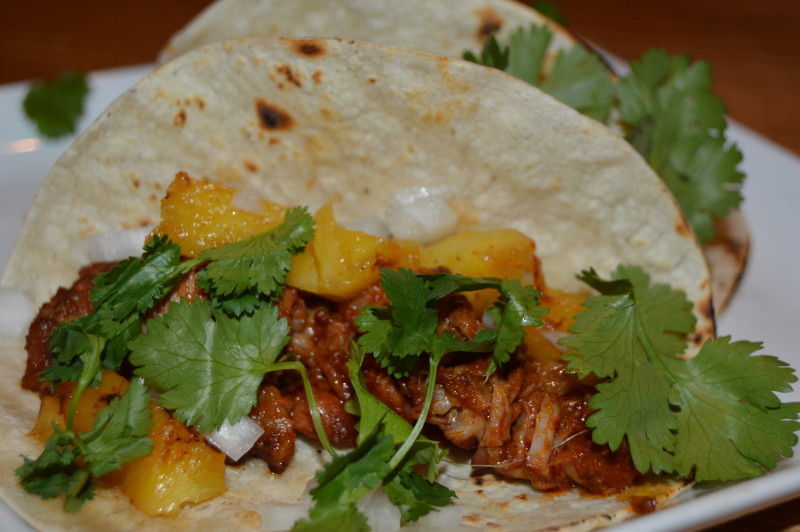 Yes, another taco recipe. Eventually we’ll run out of types of tacos to make.  Maybe. Until then, I present you Tacos al Pastor, a yummy spicy pork taco. We were first introduced to tacos al pastor when were in Cancun 4 years ago. Ryan fell in love and has been trying to find a reasonable facsimile in Minnesota ever since, without much luck. This year, for our Valentine’s Day tradition of cooking a new meal, we decided to try it out at home.

Pork al Pastor is native to central Mexico. Al Pastor literally means “shepherd style” and it is thought to be a derivative of shawarma, spit-grilled lamb used for gyros. Traditional pork al pastor is cooked all day on a spit, and the juice from the pineapple helps tenderize the meat. We don’t have an outdoor spit to slow cook meat on, especially in the middle of winter. This recipe from America’s Test Kitchen uses a dutch oven to braise the meat, finishes it on the grill and serves it along side grilled pineapple. It isn’t a quick recipe, but none of the parts are difficult (unless you are Ryan and you break the blender, more on that later). The result is fabulously tender and flavorful meat that was the nearest we’ve had to authentic since we left Cancun.

I apologize for the lack of step by step photos for this post. As is our Valentine’s Day tradition, Ryan cooks the main course and I handle dessert. I can’t convince Ryan to interrupt his cooking mojo to photograph his work.

The recipe starts by toasting dried guajillo chiles in a dutch oven. This was the only ingredient we weren’t sure we’d be able to find easily, but we picked them up at Cub Foods in the ethnic food section. Turns out they had about 5 different types of dried chiles. I had no idea. When we suddenly needed more (I’ll explain later) none of the grocery stores in Red Wing carried dried chiles, but Ryan found them at a Mexican store.  Once the chiles are roasted you simmer them in the dutch oven  with tomatoes, garlic, and other spices to make the sauce.

Once the sauce simmers for 20 minutes, you transfer it to a blender and blend it until smooth. This is where it all went wrong. We do this meal thing every Valentines Day. We get up early, go shopping for ingredients, come home, and cook the rest of day. Inevitably we end up eating dinner at 11 pm because shopping, prepping, cooking, something ends up taking longer than expected. This year we were doing pretty good. We found the ingredients without having to venture all over the Twin Cities. I had dessert in the oven and Ryan was prepping tomatoes for the sauce by 3 pm. We were ahead of schedule for a 7pm dinner. Then came the blender. Ryan somehow managed to push the top of the blender, you know the plastic part that comes out so you can add liquid while blending, into the blender while it was running, chopping bits of plastic into our delicious chile sauce. He tried to strain the plastic out, but wasn’t convinced he got it all, so he started over, with shopping for ingredients, when he was already 2 hours into cooking. We were having 11 pm dinner again.

Anyway, after you blend the sauce smooth, you return it to the pot, add the meat (3 pounds of pork butt roast, trimmed and cut into 1/2 slabs) and braise the meat in the sauce for an hour and a half. This makes for very flavorful, melt in your mouth tender, pieces of pork.

After the pork is cooked, but before it is falling apart, you move it to the grill to brown it. This adds the spit flavor to the meat, but you didn’t need to cook it on the grill all day. You also grill up the pineapple at the same time. Ryan, bless him, was grilling pork on a charcoal grill, outside in Minnesota, in February. at 10 pm. It was something like -7 degrees outside. That is dedication.

Once the meat is done, and the pineapple is grilled, you bring it inside and assemble the tacos. America’s Test Kitchen recommended serving them on corn tortillas with the pineapple, onion, cilantro, and a squeeze of lime. The meat was stupendous, but the taco toppings weren’t quite right. When we ate the left overs we added feta cheese crumbles, that helped. I think they might need tomatoes, even though there is so much tomato in the sauce. I’ll have to keep experimenting. The fish tacos I love were only so-so at first until I discovered Thai Chili Sauce. When I discover the thing that makes these pop, I’ll be sure to update everyone.  But the meat is fantastic and totally worth eating.  We will for sure be making this again. 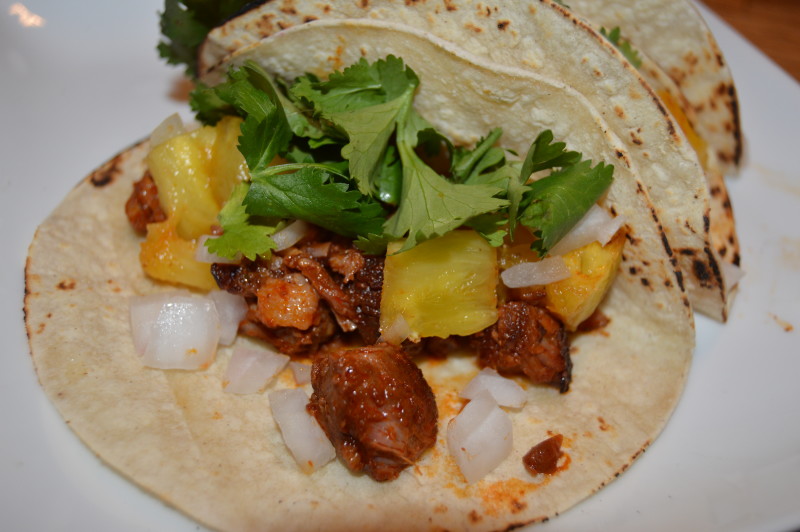 One Response to "Tacos al Pastor"