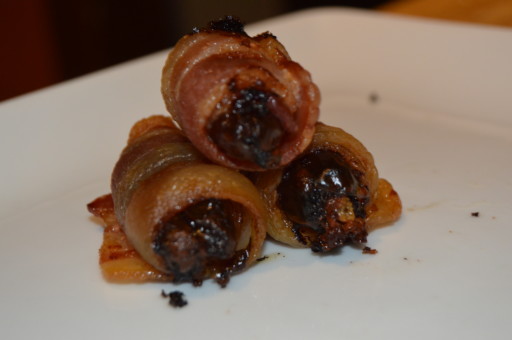 I until last week, I’d never heard of Devils on Horseback. Honestly, I still have have no idea what the name refers to. But they showed up on my Facebook newsfeed from Cook’s, were clearly bacon wrapped around something, so I thought, what the heck, I’ll give it a click. Turns out they are bacon wrapped, blue cheese stuffed, dates. I love bacon, and I think blue cheese is its own food group. I had no idea what a date tasted like, but any reason to eat bacon and blue cheese was worth further investigation…

We had plans for New Year’s Eve, and I thought, who doesn’t want fancy appetizers for a dinner party? I got all excited at having an excuse to make these Devil’s on Horseback, I procured all the ingredients (not exactly hard, since there are only 3 and as it turns out dates aren’t hard to find… who knew, I’d never looked before), and then our plans were cancelled. No worries, I just scaled the recipe from 32 to 8 and made them for myself. Happy New Year to me! 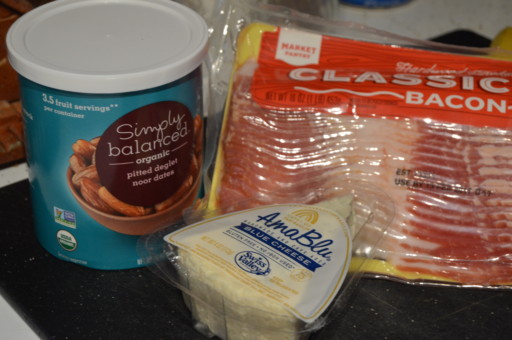 As I mentioned, the devils consist of only 3 ingredients. Bacon, blue cheese, and dates. Dates can be found in any grocery store, even the shoddy ones near me, right next to the raisins. And if you are like me and have never eaten a date before, they looks sort of like giant raisins and taste similar to raisins or prunes or figs. They are sort of nondescript sweet and sticky. I don’t think I’d just eat them out of hand as a snack, but there is nothing off-putting about them.

And making the devils is easy, just a little futzy. First chill the cheese so it crumbles without making a mushy mess. Then halve the bacon slices and slice the dates halfway open the long way. Dates apparently have a pit, and when they are pitted there is room left in the center, making them perfect for stuffing. 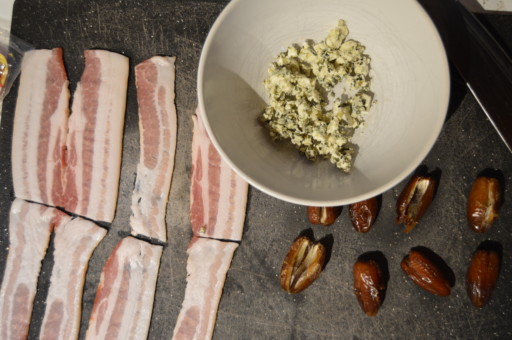 So to assemble, you stuff as much cheese as will fit into the center of the date. Since they are sticky, they sort of seal themselves back up. Then wrap the stuffed date with half a slice of bacon. Making 8 only took a few minutes. I made them again today and somehow making all 32 took 8 times as long. 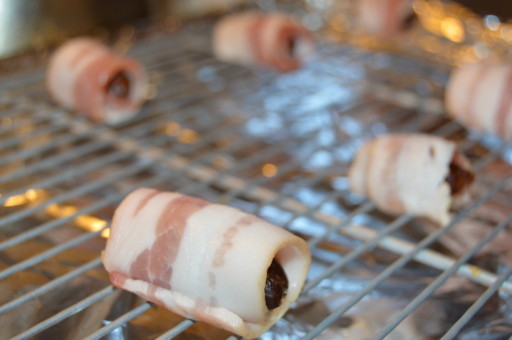 Set the wrapped dates, bacon seam side down on a wire rack set in an foil lined rimmed baking sheet. Keeping the bacon up on the rack, allows the grease to drip off and for the bacon to get crisp all the way around. Lining the baking sheet in foil makes clean up a breeze.

Bake at 400 degrees for about 30 minutes or until bacon is browned. Let them rest for 10 minutes, then dig in. 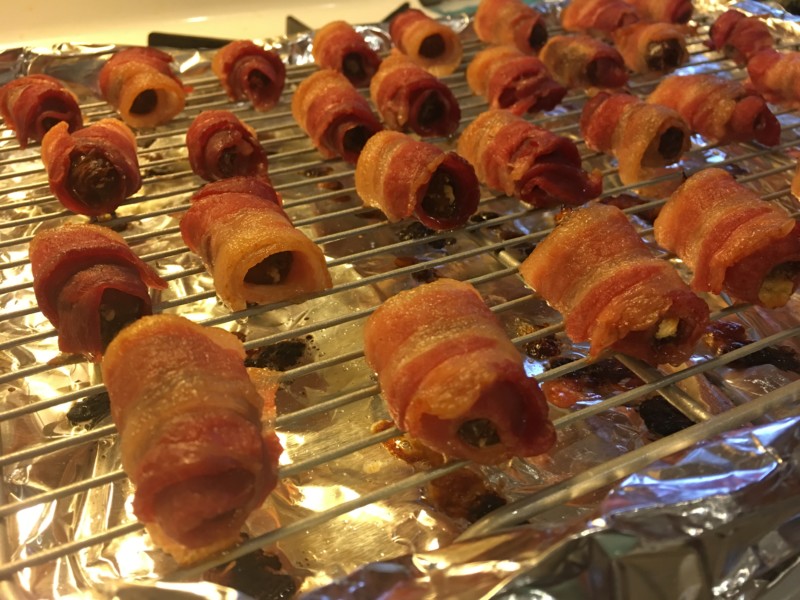 I learned a couple tricks with my trial run. Don’t over stuff the dates. The recipe calls for 4 oz of blue cheese crumbles. Since I was making a quarter recipe, I actually weighed out 1 ounce of cheese. I wanted to get it right. I jammed as much cheese as I could and still had some left over. But most of the cheese ran out while they baked. Bacon wrapped dates aren’t bad, but they were a whole lot better the second time around, when they actually had cheese in the middle.  So add enough blue cheese they they seem kinda full, but not so much that you can’t get the date to “seal” itself back up. I also think it helps to chill the cheese first. Cook’s recommended it to make the cheese easier to work with, but the first time through I was lazy and impatient so I skipped it. This time, I think the cold cheese didn’t liquefy and run out of the dates as quickly. 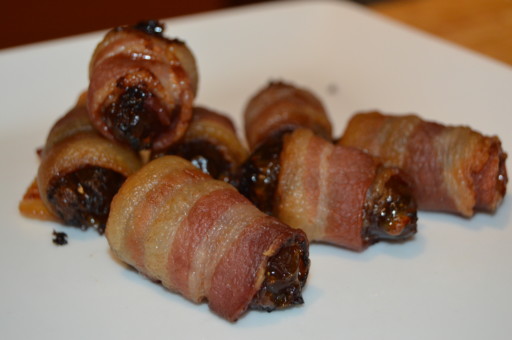 Now these are truly delicious. At least I think so. Ryan wasn’t a huge fan. He said, “they’re OK, but they are nothing I’d ever crave.” Now there’s a ringing endorsement. I, on the other hand, couldn’t stop eating them. Out of 32, I probably ate 12 myself. That’s only 6 pieces of bacon, as an appetizer…  I just couldn’t stop putting them in my mouth. They are sweet and smokey and crispy and creamy and tangy and cheesy. And perfect little bites. I’ll be making them again, even if it is just for myself!