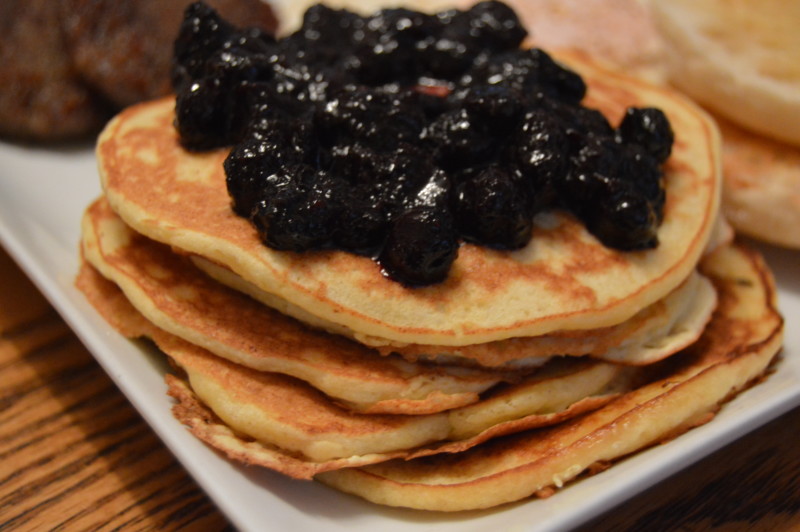 The North Shore of Lake Superior is one of my favorite spots for a weekend getaway. Or a week getaway for that matter. And my favorite breakfast spot in Duluth used to be Hell’s Kitchen. An interesting restaurant with a goth theme. Black painted walls, chandeliers made out of knives hanging over your head, and the most fabulous breakfast menu. Their Lemon Ricotta Hotcakes were the sort of deliciousness that dreams are made of. So rich and fluffy and… did I mention delicious?  Hell’s Kitchen in Duluth closed several years ago now. Sure they have a location in Minneapolis, but somehow Duluth, though 3 times further away, was more convenient for me. So I’ve been missing these hotcakes for years. Until I stumbled upon this recipe on America’s Test Kitchen.

Now really, what could make pancakes better than filling them with creamy ricotta cheese? Nothing that I can think of, but I really do love this recipe. You might think all that extra fat would make the pancakes heavy or soggy, but that isn’t the case. The secret is whipped egg whites, which lighten the batter, so you can have the richness of the cheese with the fluffiness of a more traditional pancake.

So I will admit that these are slightly more complicated than your average pancake. You need to zest and juice a lemon, and separate the eggs. Then there is the actual whipping. But all in all it is not terribly complicated, and totally worth the extra couple minutes in prep.

The recipe starts out like most, whisk the flour, baking soda and salt together. Then make a well and add the wet ingredients, in this case, egg yolk, ricotta cheese, milk, lemon zest and juice, vanilla, and melted butter. 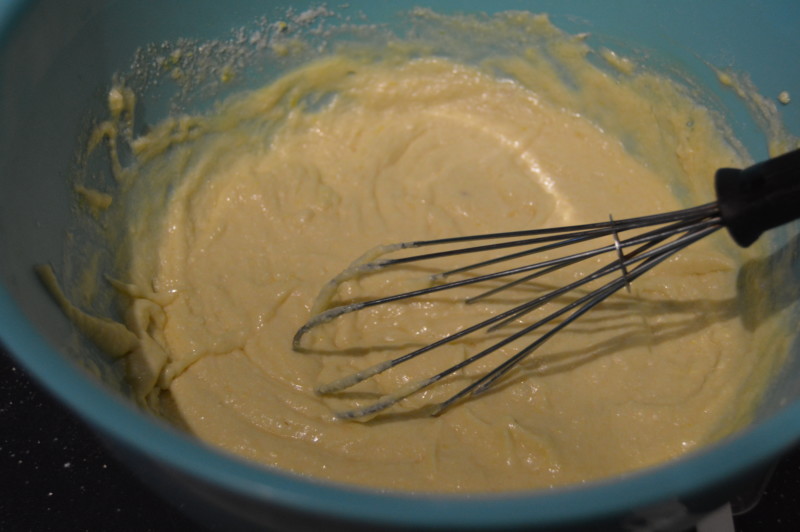 Then you whip the egg whites until foamy, add the sugar, and whip until soft peaks form. Then gently fold the whites into the rest of the batter. I’ll admit that I overwhipped the eggs pictured and they were closer to stiff peaks. I can’t say it mattered in the end. 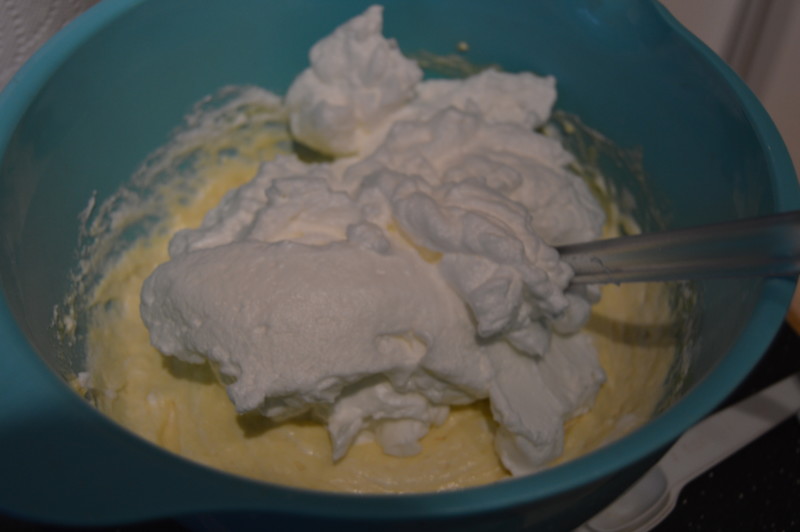 Now we just need to fry them up. I first tried using a cast iron griddle on the stove to cook these, but the heat was too uneven and they were turning out browner than I wanted. I switched to a electric griddle and had much better luck. Grease the griddle, then form the cakes using a 1/4 cup measuring cup. Since this batter is thicker than standard pancakes, they don’t spread out on their own. I used the bottom of the measuring cup to gently spread the batter into a 4 inch round. 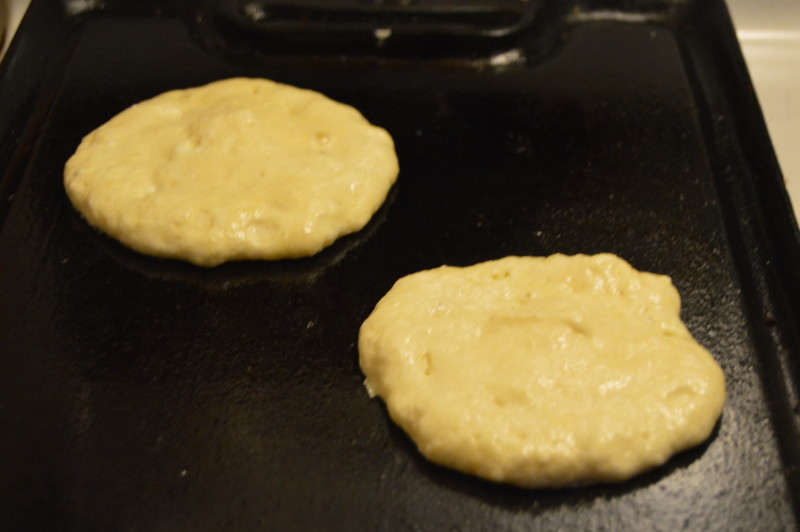 Cook on the first side until the cake is golden brown and the edges are set. If they are not done enough you’ll know, as they’ll be difficult to flip. Then flip and cook the second side. Move the cooked pancakes to a wire rack on baking sheet placed in a 200 degree oven to keep warm until the rest of the cakes are done. Regrease the pan between batches. 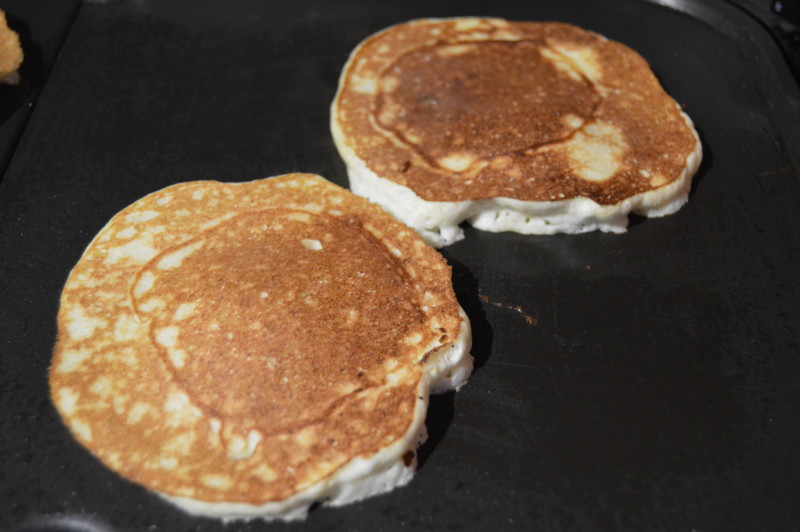 I am sure these would be fantastic with maple syrup, but at Hell’s Kitchen they were served with berries. I made a quick berry topping with frozen blueberries. I added a bit of sugar and heated them until they released their juices and thickened up a bit. 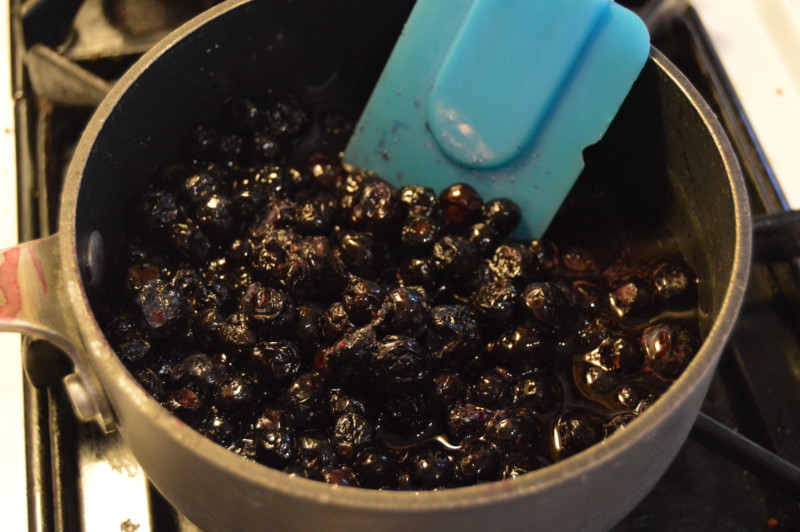 And then I ate them. Lots of them. In a big ol’ stack. So good. Just as good if not better than what I remember at Hell’s Kitchen. Rich, creamy, fluffy, flavorful. I don’t know if I can go back to regular pancakes again. I’ve made this recipe twice now, and the 2nd time was even better than the first. Partly because I started with the correct pan, but I think mainly because the first time I could only find part-skim ricotta. The 2nd time I had the full fat stuff, which I highly recommend. 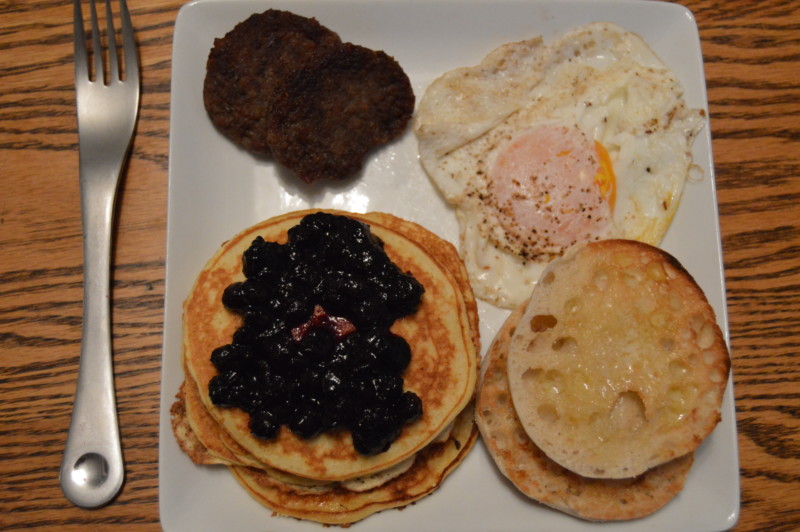 As you can see here, I made eggs and sausage and toast to go with them. Totally unnecessary, just eat more hotcakes. You won’t regret it. The recipe makes at least 16 pancakes. We’ve yet to have leftovers. They are too good to go uneaten. 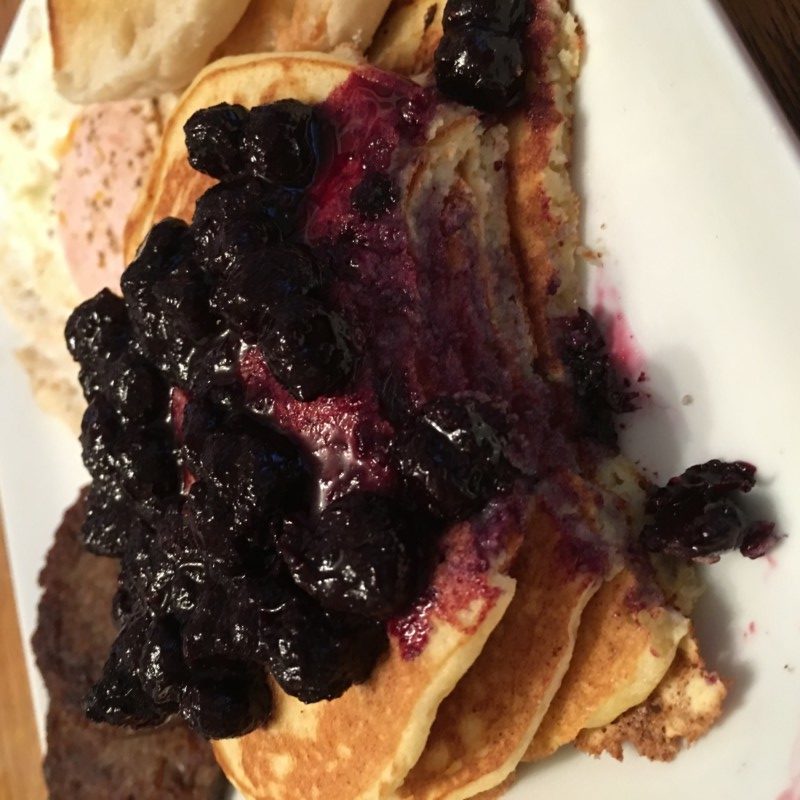 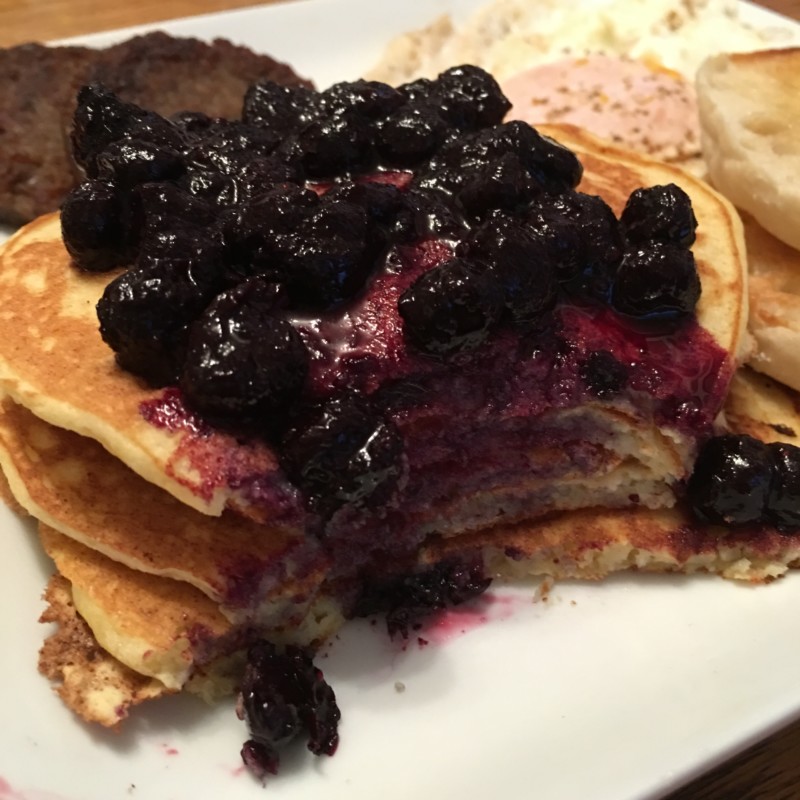