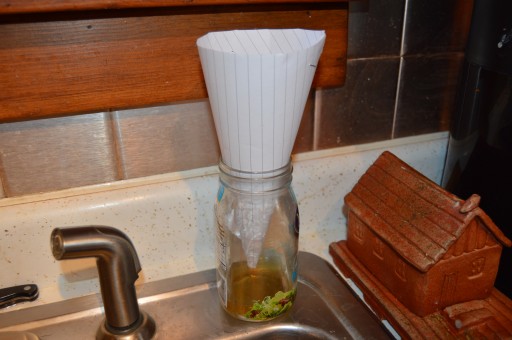 I have the same problem this time every summer. Fruit flies. Those annoying little brown bugs that buzz around my kitchen (and occasionally my bathroom). I hate air conditioning and prefer to keep it off  whenever possible. So most of the summer, my windows are all wide open. And these little buggers are not stopped by screens, they are small enough to fly right through them. They are attracted to overripe or rotting fruit and empty beer bottles, so obviously they are always swarming my kitchen trash can and buzzing around the kitchen sink. I’m sure I’m not alone, so I thought I’d share my trick to trap and kill the little suckers.

The key to successful fruit fly annihilation is apple cider vinegar. The fruit flies just can’t resist the stuff. And thankfully it doesn’t smell so bad as to stick up your whole kitchen. 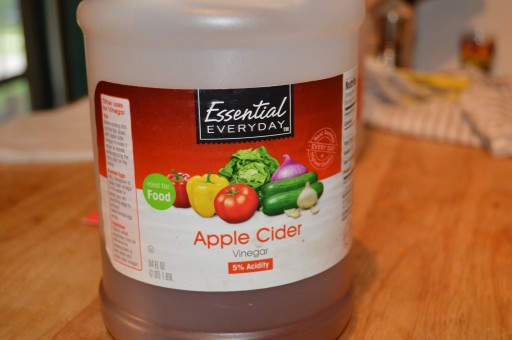 So the solution is simple. Poor some apple cider vinegar in a glass or jar. You don’t need much, just 1/4 to 1/3 of a cup. Add a squeeze of dish soap. Shake it around a bit to make some bubbles, then top the glass with a funnel. I just roll a sheet of paper into a funnel shape and stable or tape it.  That’s it! The fruit flies are attracted to the vinegar so they fly down into the funnel. But they aren’t smart enough to fly back up through the much smaller hole. Once they land in the liquid, the soap kills them, or they drown, I don’t really care. They die, that’s the point. I do know that it doesn’t work without the soap. Ryan attempted plain vinegar and caught no flies. I added the soap, and voila, fruit fly massacre.

Now I’ll spare you the photo of all the dead fruit flies, but it is pretty gross. I change the vinegar every day because the longer it sits the less effective it is, and having a jar full of dead bugs is kinda nasty. I just dump the liquid/dead bug mixture down the drain, and fill the glass right back up with fresh vinegar an soap. My same makeshift funnel has been working for 2 weeks now.

I leave the jar near where the flies are thickest, but try to keep it away from open windows. No need to attract additional bugs. Within a couple hours the number of flies hovering around my trash can fell significantly and by the next day they were all but gone. As long as I refresh the vinegar regularly, I have no fruit fly issues. If I notice a few buzzing around, it is always because I neglected to change the vinegar for a couple days.

So if you are experiencing an issue with fruit flies, and taking out your trash every time you throw away an apple core or melon rind just isn’t practical, give this a shot and let me know how it works out.