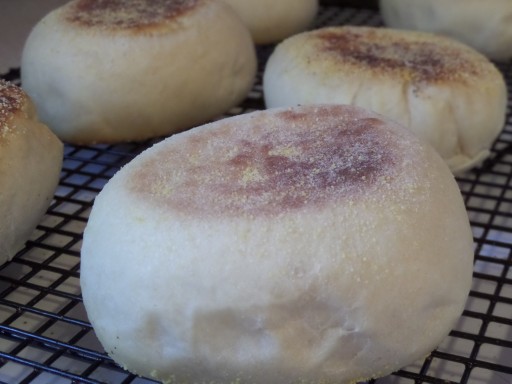 Okay, so I’m a little obsessed with baking bread products normally bought in the store. Last week it was bagels, this weekend it was English muffins. Actually, I was craving a breakfast sandwich, on an English muffin, and rather than drive the 5 minutes to the store, I decided to spend the whole weekend baking English muffins. Completely logical, don’t you think?

So the English muffins start much like the bagels. Mix up dough, let dough rise, shape dough, let dough rise more. I get the idea most bread works this way. The recipe did mention that the dough should be kneaded until it passed the window pane test. Not being a bread baker, I had no idea what that was. But the nice people at The Kitchn have some great information. I clicked on the “You Might Also Like” links on bread baking and over vs under kneading and found all of it really helpful.

Once my dough passed the windowpane test, after about 8 minutes of mixing with the dough hook in my stand mixer, I let it rise for the recommended 90 minutes. Then I divided the dough into six even (sorta) portions and formed them into round rolls. Then place them on a baking sheet lined with parchment, sprayed with cooking spray and sprinkled with corn meal. Then spray the tops of the rolls and dust with more corn meal.  Let rest for another 90 minutes. 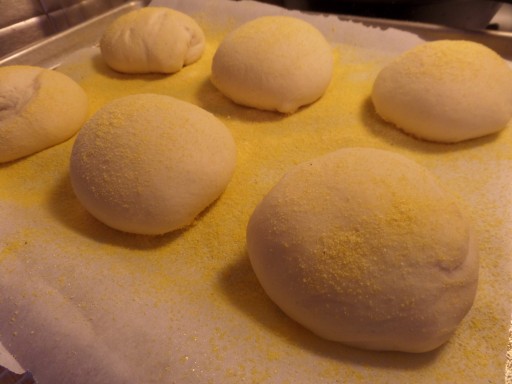 Now the fun part, frying these up. I used a cast iron skillet and did 3 at a time. The recipe warns to to turn them too soon, but my skillet must have been a little hot so they got a little browner than I would like. No big deal, still delicious. 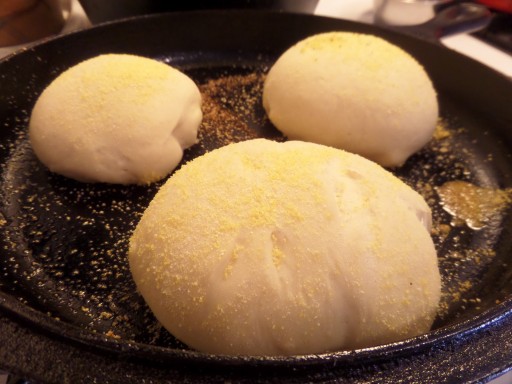 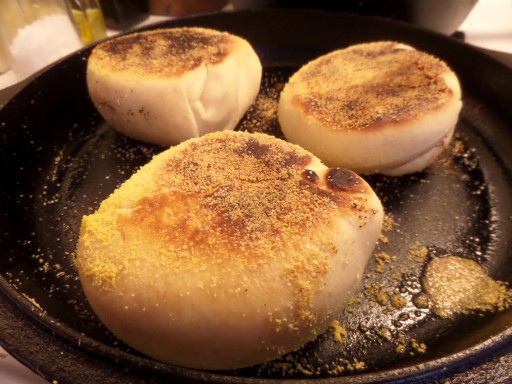 Once both sides are nice and brown, put them directly into the oven to finish baking through. Then then come out looking all fabulous and delicious. 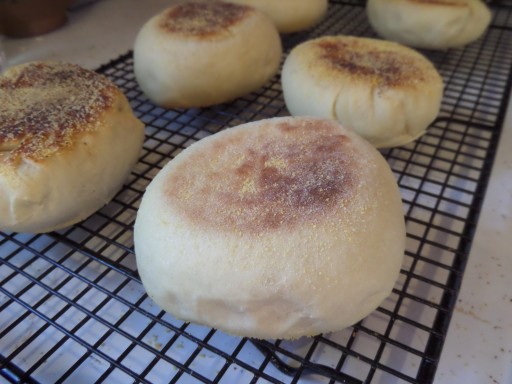 Once they cooled, I cut one open, toasted it, and buttered it up, anxious to see how they turned out. They are good. They taste really good, but I was disappointed with the texture. English muffins should be craggy, with lots of nooks and crannies to hold the butter. These were a little too smooth. 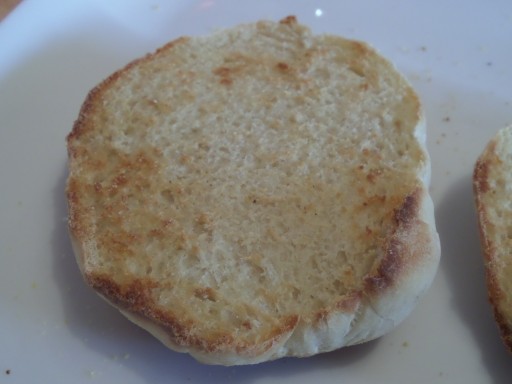 So I set on a mission to discover what makes the nooks and crannies. Had I done something wrong?  As it turns out, craggy muffins seem to elude many home bakers. I saw lots of theories on how to improve the texture, from adding baking soda to the dough, to one that suggested it was all in how you open it, use a fork instead of a knife. I can tell you that using a fork to pry apart the muffin does create an uneven surface, but it isn’t changing the texture of the bread itself.

The theory I decided to test out was to overproof the dough. That is let it rise so much that it collapses back on itself. A big bread baking no-no, apparently, because it creates a sour tasting bread with lots of holes. Sounds pretty close to what I want in an English muffin. So following that logic, I mixed up my second batch of dough just like the first, only instead of letting it rise for 90 minutes, I left it out on the counter overnight. Here is what I woke up to the next morning. 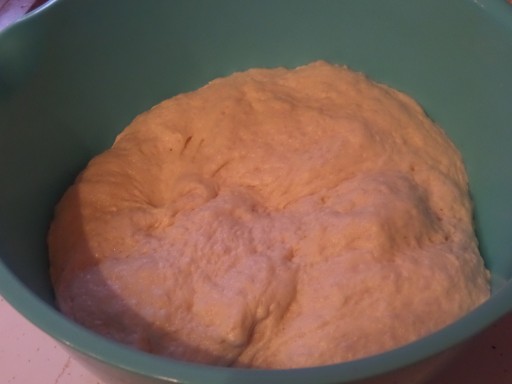 Clearly the dough had over-risen and was falling back down. Good. I proceeded with the rest of the recipe just as before, shaping the dough into round rolls and letting them rest, then frying them in a skillet before finishing them in the oven. The results were better. 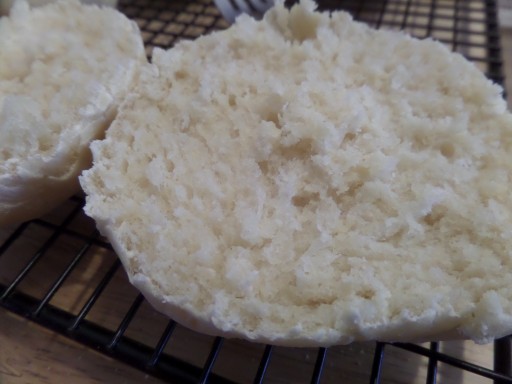 Now, I did separate this muffin by poking all around it with a fork then pulling apart the halves rather than cutting it. I wanted any help I could get, but even so, the crumb is less even and there are some crannies. It isn’t quite as craggy as I would like, but like I said. It’s better. I might try baking soda next time, but for now, I have more English muffins that I need.  And regardless of texture, they are all super tasty.  And they made a mighty fine breakfast sandwich. 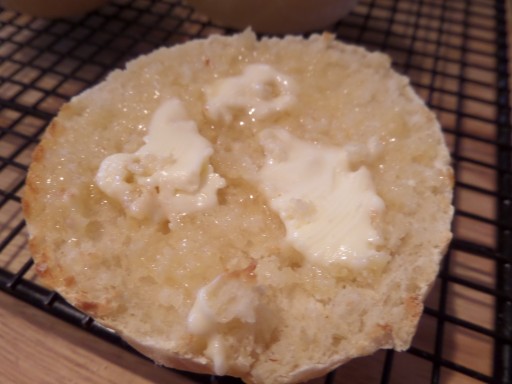 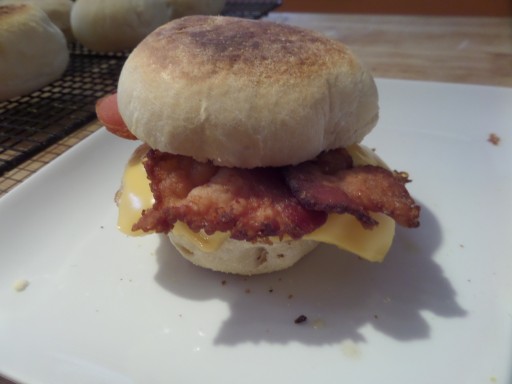 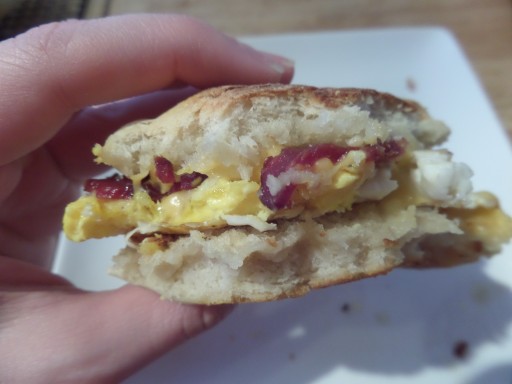