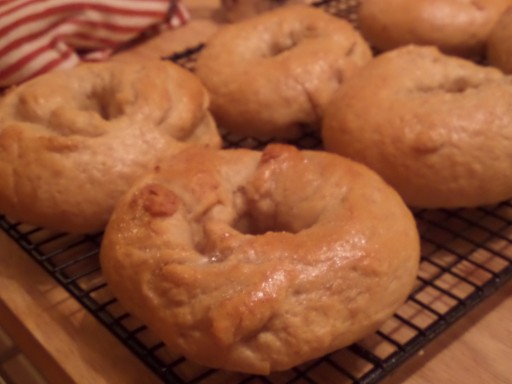 I don’t bake bread. I don’t have a good reason, I just have never done it. My mom never baked bread, I don’t know how to knead, I guess it intimidated me. But ever since I bought my beloved Kitchenaid mixer, I’ve been looking for a reason to test out the dough hook. I saw a recipe for homemade bagels on r/baking last week, thought it sounded interesting so I pinned it and moved on. The very next day I was reading the Star Tribune as part of my morning routine, and they also had a bagel recipe. I decided it was a sign, I was meant to make bagels.

I decided to go with the recipe from the Strib, because it contained crazy ingredients no one has on hand and I had to find in a specialty store, so it must be better, right?  But seriously, their reasoning for the crazy ingredients made sense to me, and made me believe I was going to end up with tastier bagels in the end.

The crazy ingredient was barley malt syrup, which is supposed to give the bagels a more complex, malty, sweetness. Sounded delicious to me. The Strib article said it could be found in co-ops, I checked one local co-op and struck out, but my second stop, a natural foods store did have it. I bought the last jar, apparently there was a run on barley malt syrup. Everyone wants homemade bagels. 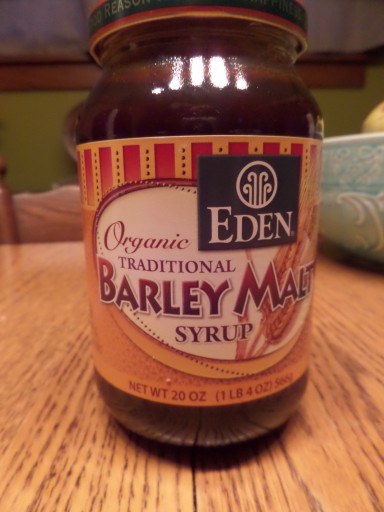 Now like I said before, I’ve never made bread. But I can follow a recipe so I had high hopes for my bagels. Then I mixed up my first batch of dough. I don’t know if I miss measured the flour or the water, but my dough was just crumbs, nothing would stick together. I pitched the whole thing and started over. Try two had dough I could at least knead. But my confidence level had fallen.

So I kneaded the dough as best I could and let it rise. Confidence level rising, the dough rises! 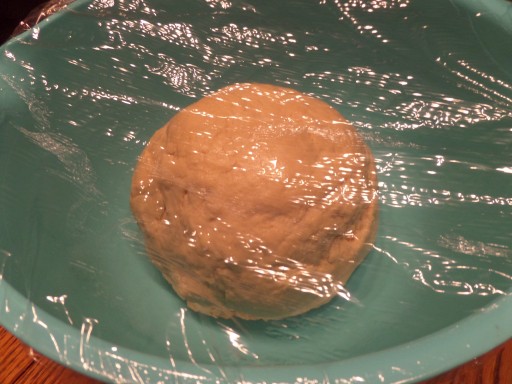 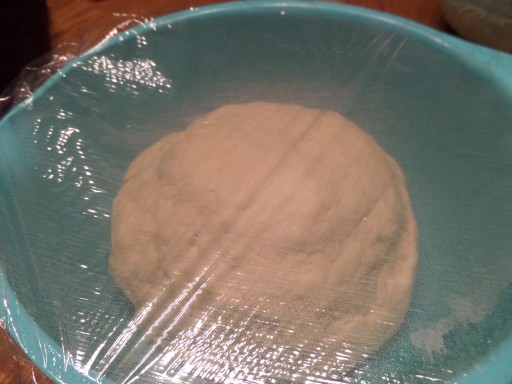 The next step was to shape the dough into rings. And my confidence starts falling again. I tried to follow the instructions. “Pulling the raw edges toward the center, pinching them closed, then firmly rolling the dough […] using the cup of your hand” sounds simple enough, but it just didn’t make sense to me in practice. But I did the best I could. They didn’t look the prettiest, but oh well, we trudge on anyway. 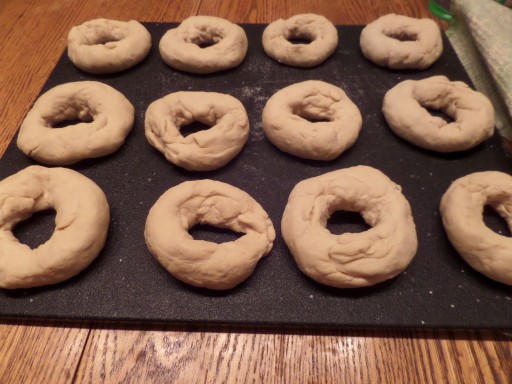 They did look a little better after they rested for 20 minutes, which was how long it took me to get the water boiling so I could poach them. 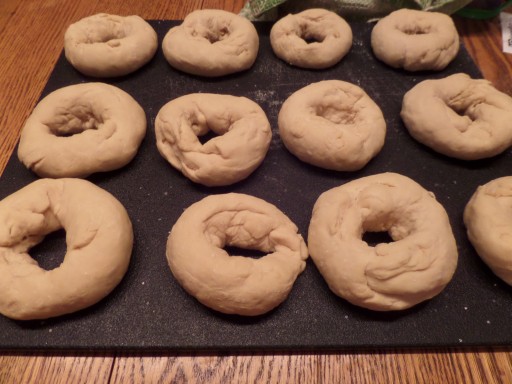 Poaching them was actually kinda fun, watching them drop down and float back up. They were easy enough to flip and remove with a slotted spoon. 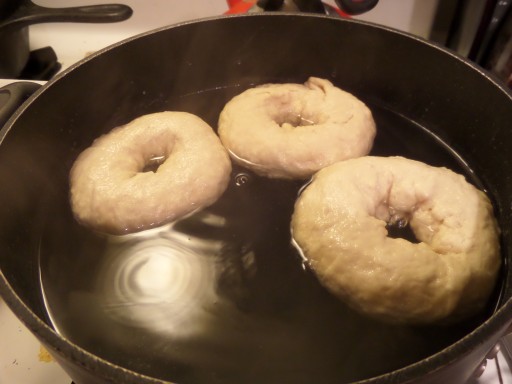 Once poached they get a brush of egg whites and go into the oven. 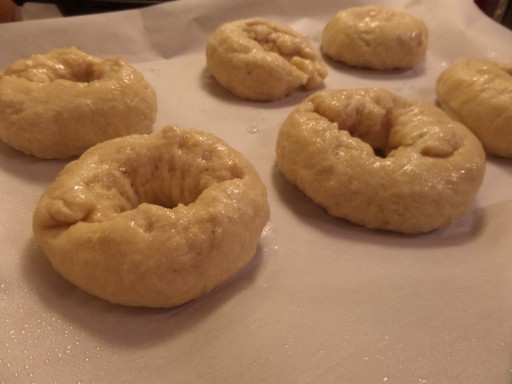 And then they come out all golden brown and delicious. 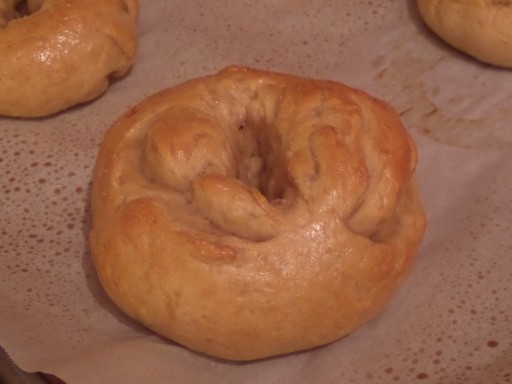 Okay, so it isn’t the prettiest bagel ever. I called it ugly but Ryan corrected me. They’re rustic. Regardless of their “rustic” looks, they are darn tasty. I had to have one last night while it was still warm, and it was pretty good. This morning I toasted one and smeared it with cream cheese and jelly. I was in bagel heaven. They are as good or better than any store bought bagel I’ve ever had. They are good and crusty on the outside and nice and chewy in the inside. The barley malt syrup does give them a subtle malt flavor, but it isn’t overpowering  I will definitively be making these again. Probably just as soon as we eat the 12 I made last night. 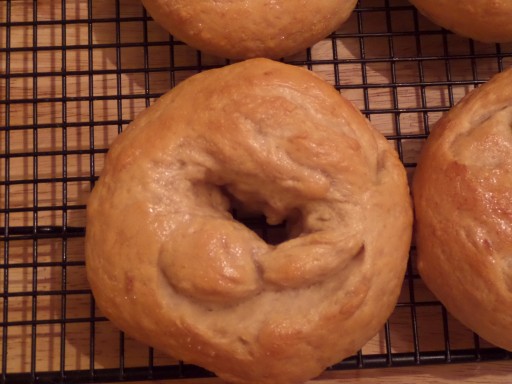 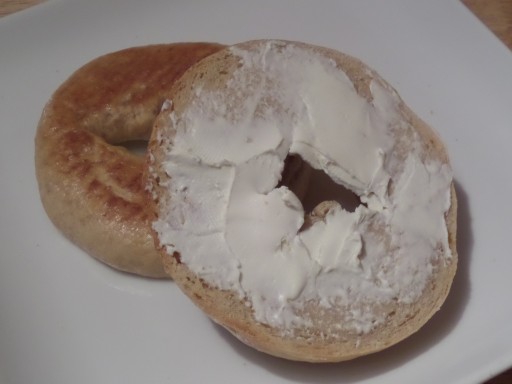 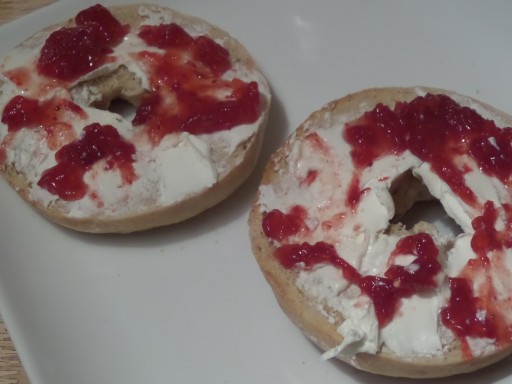 One Response to "Homemade Bagels"