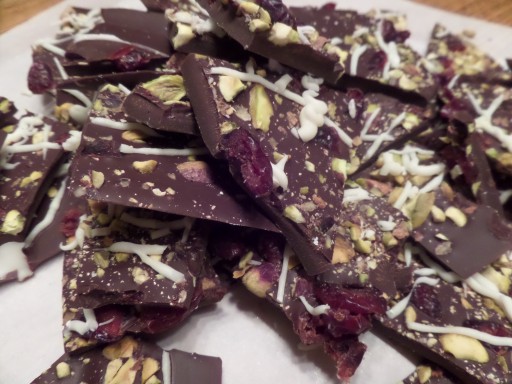 I first saw this recipe on Pinterest, if you can even call it a recipe. It is more like an idea. A delicious, delicious idea. Dark chocolate meets salty pistachios and sweet dried cranberries. Fabulous.

I started with good chocolate. No almond bark here. I melted two bags of Ghirardelli 60% cacao chocolate chips. They are my go to chocolate chip because they are the best tasting chocolate chips ever. You won’t go back to nestle, I promise.

Anyway, I melted the chocolate chips in a double boiler, then spread the melted chocolate in a rimmed baking sheet lined with wax paper. Then I liberally sprinkled chopped pistachios and dried cranberries over the top. Then I stuck the whole thing out on the porch until the chocolate firmed back up. 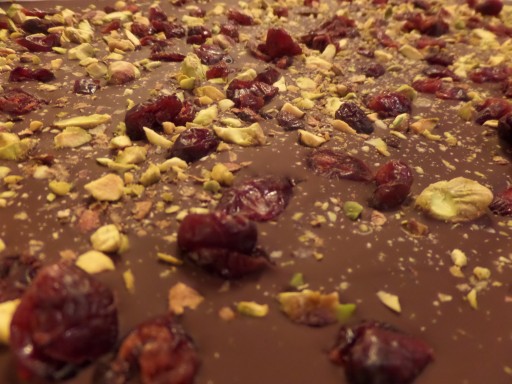 Once the chocolate was hard again, I melted some vanilla almond bark and drizzled it over the top, just to make it pretty. I tried using white baking chips, but they don’t melt. I knew they weren’t really white chocolate, but apparently they aren’t even food. I actually burned them in the microwave on half power so I tried again in a double boiler. The best I could get was grainy paste. Almond bark at least melts.

So after I drizzled the chocolate with the almond bark, I put it back outside to harden again. Then I broke it into pieces. That’s it. Not even really a recipe, but oh so tasty.