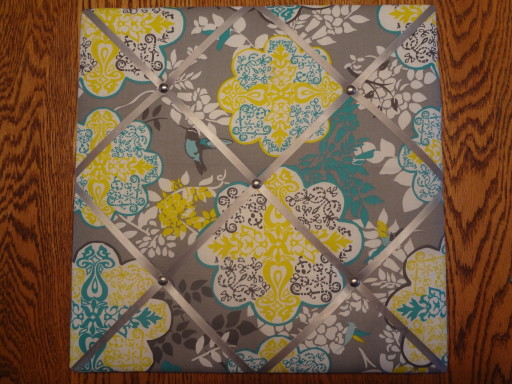 You may recall I repainted my living room, dining room, and kitchen (twice) this spring/summer. This is what prompted the new living room curtains and roman shades in the kitchen. Since I have people coming over for Liam’s birthday, I decided to finally finish up the redecorating. (And I might finally getting around to posting before and after photos.) This weekend I made the last pair of curtains I needed for the living room and a roman shade for the hallway. (It only took 5 years to get a window covering on that window…) We had already found some throw pillows at Ikea and everything was really pulling together except for this one blank white wall. The painting that had previously hung there no longer matched the rest of the decor, but I hate empty white walls. Then I was struck with a stroke of genius.

I had been looking for a way to display photos of Liam, but I didn’t want to spend a bunch of money on frames. The perfect solution to my blank wall would be one of those fabric memo boards where the photos are held in place by ribbons. And how hard could it be to make one? A quick google search would tell me these are called French Memo Boards, and it would indeed be simple to make, so I informed Ryan of my plan and was off to Joann’s.

Looking at my blank wall, I decided I wanted 3 memo boards about 16 inches square. I purchased 1.5 yards of fabric to make sure I had plenty, I found batting, ribbon, upholstery nails, everything I needed at Joann’s except the actual board itself. I originally wanted to use canvases, but my Joann’s doesn’t sell canvas. Then I thought about cork board, but decided it would cost more than I wanted to pay. So I sent Ryan to Menards and told him to find plywood or something that would work. He came back with laminated pressboard. It looks like shelving. It worked perfectly, except for one minor issue. It was a bit thin and the nails poked through to the back. No problem, I just had Ryan file off the ends of the nails. I knew I kept him around for a reason.

Okay, so to get started making a fabulous french memo board of your own you will need to gather the following supplies:

I started by cutting my batting and fabric to size. My boards ended up being 15 3/4 inches square and only about a quarter inch thick. I cut my fabric to 18 inches square, so I could actually get enough for 4 out of 1 yard. Of course I only needed 3 and I had a yard and a half, but now I have extra fabric for a future project.

The first real step is to attach the batting. I centered my board on the batting, then folded the batting on to the back of the board and secured it around with staples, like so:

I found it easiest to start on the center of one side, then do the opposite side. this way I could make sure the batting was nice and tight so it would lay flat across the front. The piece of minky is just there to protect my dinning room table from the staple gun. I realized after the first few staples, that the back end of the gun was leaving a dent in the table every time I stapled. Eventually I figured out to keep the staple gun on the board. I was a little slow on the uptake.

Next, do the same thing with the fabric. Center the board on the fabric, fold over, staple to the back. I did the center of each side first, then finished the sides, then came back for the corners. I folded the corners so they would look nice from the front.

After I had finished the first one, Ryan the helper that he is mentioned that he learned from stretching canvas that you should always staple fabric at an angle, so on the next ones, all my staples look more like this:

Next is placing the ribbons. You can place the ribbons how you want, but I decided after looking at several memo boards online, that I liked the standard across both corners and then from the center of each side. So I laid the ribbons out roughly where I wanted them and cut them to size, making sure to leave enough extra to staple on the back. I needed 2 18 foot spools to do 3 of these 16 inch boards.

First I laid the ribbons from corner to corner, crossing in the center, then I pinned the ribbons to the back of the board.

To get the middle ribbon layout exact, I measured the center of each side and made a mark, this is where the side ribbons will cross. Once I figured out the placement, I pinned the ribbons to the back to keep them in place. I also wove the ribbons, alternating over/under at each point they cross.

Then staple all the ribbons in place. Once stapled, I trimmed off any extra.

The last step is the insert an upholstery nail at each ribbon intersection. I found these at Joann’s. They come in all sorts of decorative finishes. I choose the silver ones because they matched and weren’t super expensive. You could also use decorative thumb tacks, or you could sew on buttons. 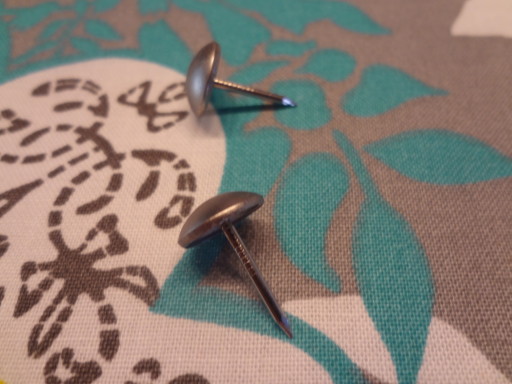 I’ll be honest, I actually had Ryan hammer in these nails for me. Not that I can’t use a hammer, it’s just that I knew my boards were thinner than the nails were long so they were going to go all the way through. That as better handled in the garage, which is strictly Ryan’s domain. While he was out there, he filed off the points that stuck through and put a hanger thingy on the back. If you didn’t have the mounting hardware, you could staple on a ribbon to hang the board from.

And here it is all finished.

And here they are on the wall. 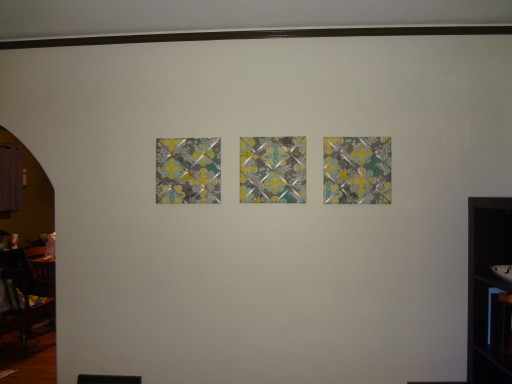 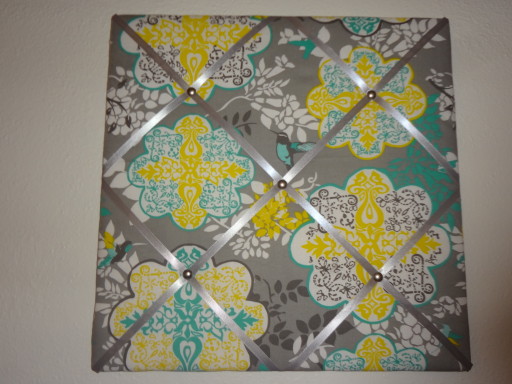 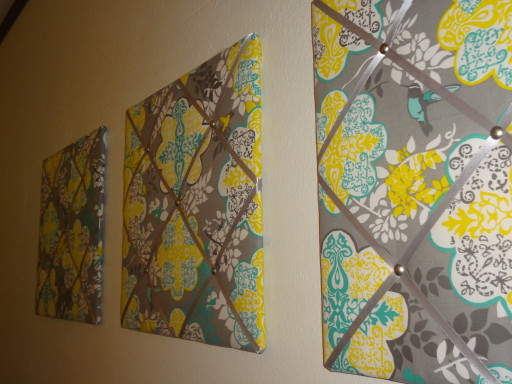 And filled with photos. 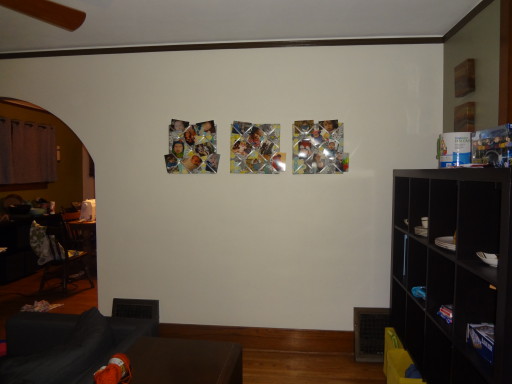 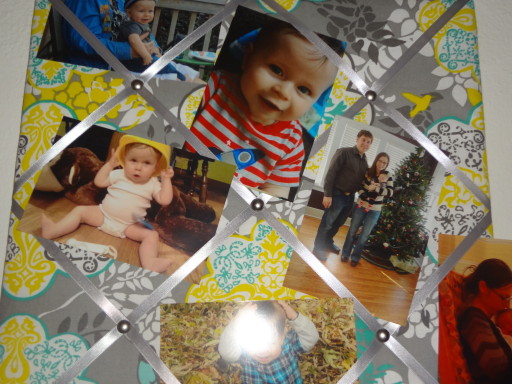 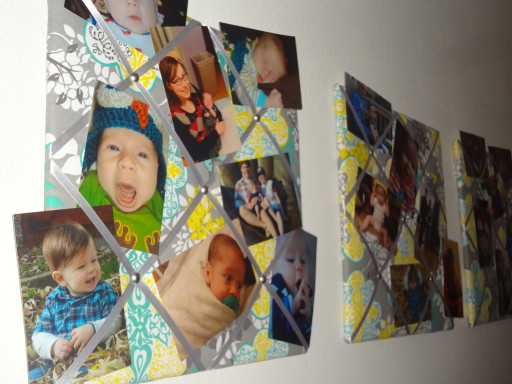