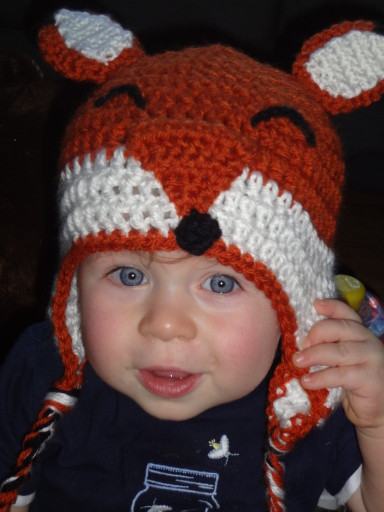 What baby (or adult for that matter) wouldn’t look adorable in this hat?  I am a sucker for animal hats, I’ve made several owl hats for friends of all ages, and as far as I can tell, foxes are the new owls. Liam had an owl hat last year that obviously won’t fit his giant head anymore, so I decide this year, a fox was the way to go.  I originally planned to make this his Halloween costume along with a crocheted tail. We did buy him a costume, but now I don’t know, the hat turned out so cute I might still make the tail anyway. Of course he won’t keep the hat on his head, so we’d still have to address that problem.

The pattern below is for a toddler sized hat, but I adapted the “hat” portion of the pattern from Repeat Crafter Me’s owl hat,  and she has sizes newborn to adult, so you could easily adapt the patterns for other sizes. Of course while you are there, give the owl hat a try, too. It is super cute and a great gift for a little one. I made one for myself and get compliments on it almost as often as I get funny looks.

For orange yarn I used Vanna’s Choice in Terracotta. It took about half a skein, maybe a bit more. For the white and black I just used left overs from another project. You need a small amount of white and a tiny amount of black.  For the ears, I had originally made them in rows, but they were too floppy to stand up. So I tried again, this time in rounds so they are twice as thick. I prefer continuous rounds, so that’s how the pattern is written, but you could join the rounds if you’d like.  As always, let me know if you find any errors or if anything is unclear. I’m happy to help. 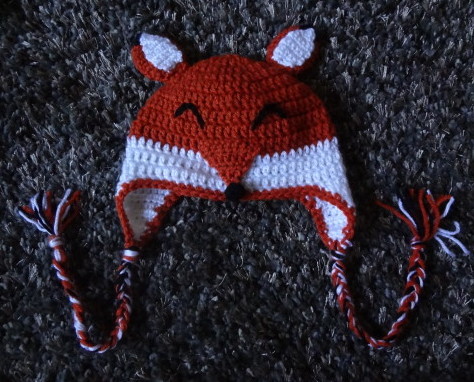 For the Hat:
Like I said above, I used this pattern from Repeat Crafter Me to create the hat. It is an excellent pattern and she provides any size you could possibly need. Why would I reinvent the wheel?  So jump over there to create your hat, then come back here to finish it up.

The hat pictured uses the Toddler/Preschool sized pattern. I made the hat in orange through round 9, then switched to white for rounds 10, 11, and 12. I continued the ear flaps in white as written, then changed back to orange to do the trim.

Once you have your hat, continue below to add the fox face.

Ch 4. In 3rd ch from hook, dc, but do not pull through the last loop, leaving 2 loops on hook. Repeat 4 more times. You should have 6 loops on the hood. Finish the last dc by pulling through all 6 loops. Fasten off leaving long tail for sewing.

Assemble the hat:
Refer to picture above.

Flatten ears. Sew ear whites to ears. Sew ears to hat between rows 3 and 4.
Sew muzzle to hat and sew nose to end of muzzle.
Embroider eyes, using chain stitch. Eyes should be around row 7 of hat.
Weave in ends.

Take 3 white, 2 orange and 2 black strands and thread them all onto a yarn needle. Use the needle to pull stands through the end of the ear flap with the orange tails from the trim. Pull the strands so they are centered and all ends are equal length.

Knot the strands at the base of the ear flap, then divide strands into thirds and braid to desired length. Knot the end of the braid.

Use the remaining strands to add a braid to the other ear flap, making sure it is the same length as the first. Trim the ends.