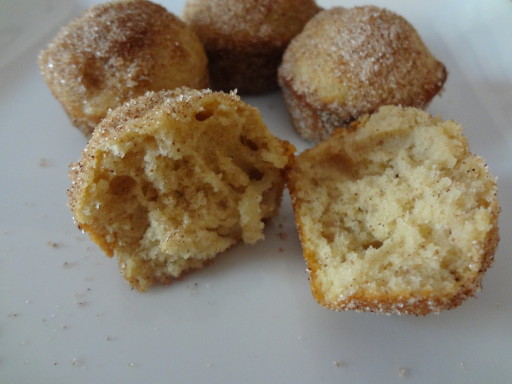 Are they mini Apple-Cider-Doughnut muffins or apple cider Mini-Doughnut muffins or apple cider doughnut Mini-Muffins? It doesn’t matter, they are delicious.  This one is a Pinterest find from ambrosia. I knew as soon as I saw them that they would be my next new recipe to try. Mini muffins that taste like apple flavored mini doughnuts. What’s not to love?

Liam was running a slight fever this morning, so I had an unexpected day off work. Ryan’s been bugging me to make some chocolate chip cookies, so that was what I had planned to do while Liam napped today. But I discovered that I was out of parchment paper and low on butter, so the cookie recipe would have to wait. Plan B, try the new muffin recipe from Pinterest. (In case you are wondering, I do bake things other than muffins… and I’ll prove it, eventually…)

Ambrosia has a wonderful step-by-step recipe with much better photographs than I am capable of taking, so I didn’t bother. I followed the recipe exactly, with one exception. I didn’t have any whole cloves, so instead I added 1/8 teaspoon ground cloves to the batter with the other spices. They are delightfully easy to make. I didn’t bother with gloves when I tossed the buttered muffins in the cinnamon sugar, but I did end up with very sugary fingers.

Anything covered in cinnamon sugar is bound to taste good and these are no exception. They really do taste a lot like mini doughnuts, with a subtle apple flavor and warm fall spices. I wish they were even more appley, so next time I make them I might add more shredded apple. I think they could handle the extra moisture without negatively affecting the texture of the muffins.  And I might kick up the spices a bit, too. Or make a variation with pumpkin instead of apple. Mmmm… pumpkin muffins. I love fall baking. 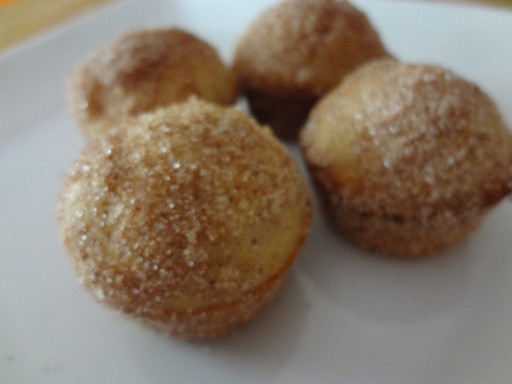 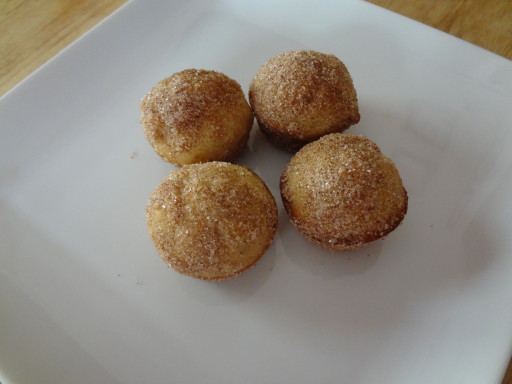