I have no idea why these are called cabin brownies. I guess I can assume someone used to make them at a cabin, or they ate them at the cabin. I don’t know. I don’t have a cabin. But what I do know is that they are delicious no matter where you eat them. A mix between a brownie and a scotcharoo bar. Chocolaty, cakey, gooey, crunchy, fudgy, peanut buttery goodness.  And as a bonus, they are easy to make.

First, gather your ingredients. Now normally I shun recipes purporting to be homemade where the main ingredient is a boxed mix. But in this case, boxed is the way to go. The original recipe included making your own brownie, but it was way more work and way less tasty than what Ghirardelli has so kindly packaged for us. I suppose you could use a different box brownie mix, but Ghiradelli is really the best.

Start by mixing your brownie mix per the instructions on the box. If you are using my recommended mix, the instructions for Ghiradelli Chocolate Supreme are to preheat the oven to 325. Mix 1/4 cup water, 1/3 cup vegetable oil and 1 egg in a medium bowl. Add mix and enclosed chocolate syrup. Stir until well blended. 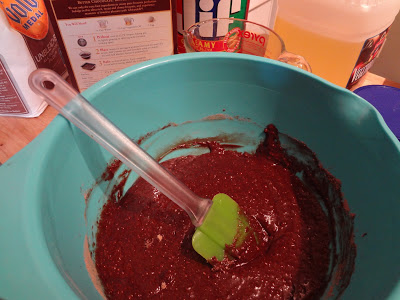 Next, spread the brownie batter in a greased 13 x 9 cake pan and bake until brownie is done. The timing here gets a little tricky. The brownie mix calls for baking 40-45 minutes in a square pan. Since this is done in a rectangular pan, the brownie is thinner and therefore bakes faster. I baked mine for 30 minutes and the brownie was very soft. Another 5 minutes wouldn’t have hurt.

When the brownies are done, remove from oven and let cool completely before continuing the recipe.

Once the brownie cools, spread a jar of Marshmallow cream over the top of the brownies. The key to getting the marshmallow to spread without ripping the brownie to shreds is a hot spatula. I kept running the rubber scrapper under scalding hot tap water as I went. As soon as it started sticking, the spatula went back in the water.

Now for the topping. In a saucepan over low heat, melt the chocolate chips and peanut butter until smooth.

Now spread the chocolate/peanut butter/Rice Krispie mixture over the layer of marshmallow creme. Refrigerate until the topping is firm.

I store these bars in the fridge because the chocolate will start to melt if you leave them out too long, but really, they won’t last long enough anyway. 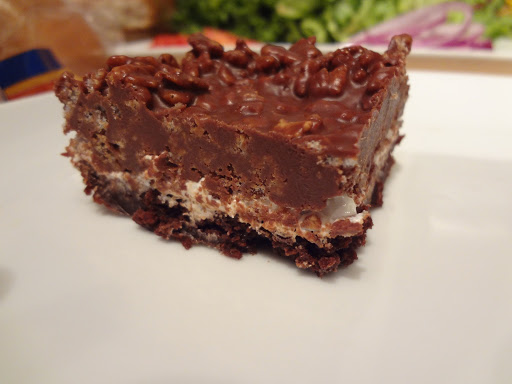 One Response to "Cabin Brownies"